“In many shamanic societies, if you came to a shaman or medicine person complaining of being disheartened, dispirited, or depressed, they would ask you one of four questions:

This post is a complement to my post of an essay by Elisabeth Josephs-Serra on Embodied Feminism of a few days ago. It is written by her partner Mark Josephs-Serra (“Joseph”). Their website, A Culture of Honouring, is dedicated to “Exploring the possibility of a culture based on the honouring of both the Masculine and the Feminine.” If you like these essays, you can download a free e-book from their website here. 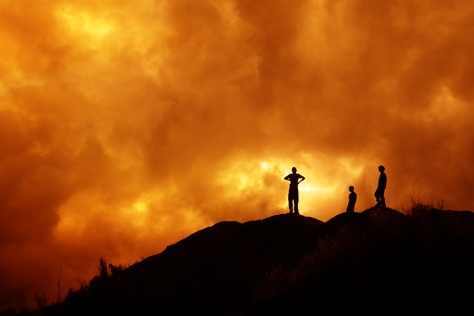 Inner Marriage, The Men’s Movement, and The Feminine

Within himself he has opened to the daunting freedom and creative potency of the masculine, and the overwhelming mystery and wisdom of the feminine. The masculine in him energises his feminine. The feminine in him grounds his masculine. These universal energies are erotically united inside him. This is Inner Marriage.

And the courtship is hell! After all ~ why are we not already rested in the full nobility of the masculine?  Why are we not already surrendered to the full splendour of the feminine? Whatever our reasons ~ they are what need to burn. The First Man in us says ‘no’. The Second Man in us says ‘yes’ because he ought to. The emerging Third Man says ‘yes’ because he is already committed to facing being alive.

In the 1990’s the Men’s Movement seemed to be gathering quite some momentum. Iron John was a bestseller, men’s groups were popping up everywhere, and men were enquiring into the essence of manhood. Since then there has been some integration of this enquiry into mainstream culture, but the enquiry itself seems to have lost its erection, so to speak. The main thrust of menswork today seems to be the Men’s Rights Movement, which has its pros and cons, but certainly isn’t pursuing the enquiry into the essence of what it means to be a man.

This is a vast generalisation of course, and some menswork has continued (some of it quite vigorously), but I retreated from menswork for some time because I came to feel that we could only go so far without the women. And my sense is that most of the menswork that continues, although completely worthwhile, will eventually come to the dead end we came to…

In the 1990’s I started lots of men’s groups, camps and workshops, but then I took a break. I even left a men’s group I’d been in for many years. To caricature things (but also be brutally honest) it looked a bit like this:

I meet a male friend, Bob.
Me: How’s it going with your partner, Jenny?
Bob: Yeah, fine. You know, ups and downs.

Later that day I meet Jenny.
Me: How’s it going with Bob?
Jenny: Well, we’re in crisis. I think we might be splitting up.

There was so much emotional disconnection in the men. The sharing, and even the catharsis, that was happening in our men’s groups wasn’t carrying over into our lives. There was a chronic, ingrained resistance to the feminine – and whether we were gay or hetero, our feminine partners were freaking out.

The masculine wasn’t in deep, intimate connection with the feminine. We were cultivating our masculine together, and our feminine – but in everyday life things just weren’t coming together. We weren’t showing up in ways that won the respect our masculine so much wanted, and our feminine was just under-developed. We felt criticised, unsupported and undermined by our feminine partners, and they were feeling unprotected, unheard and unloved. The more they expressed their discomfort, the more defensive we’d become. When, inevitably, they expressed their discomfort in unreasonable and unfair ways, we’d latch onto the unfairness – in order to avoid the point: that we were shrivelled and contracted and defensive, and that they were deeply disillusioned with the men to whom they’d given themselves. Disillusioned, and sometimes desperate.

I am not only talking about ‘others’ here. I too was defended from my wife’s pain. I too felt blamed. Like so many men, I didn’t know how to expand into the fullness of my masculinity – I didn’t even know what it was. I was caught inside my own smallness, my own little ego. And fighting for its survival felt like life or death. Because of all this, my personal enquiry into manhood, once I had withdrawn from the men’s movement, had two concerns, (1) the freedom and genuine empowerment that allows the masculine to be open to the feminine, and (2) the deepening of my seeing into the heartful essence of the feminine.

Gradually I came to see and understand the choice I had: to identify either as a lone male ego, or as a participant in the collective evolution of the genders. I came to appreciate the fundamental natures of the masculine and feminine: how the masculine pulls in one direction – upwards, to the stars, to aloneness, to power, to purpose, to achievement, to freedom; and how the feminine pulls in the other – downwards, to the earth, to the senses, into connectedness, authentic relationship, towards pleasure and pain, and love. And I felt how this pulling in different directions is the erotic charge between them.

The problem for the masculine is individuation. In other words, while he still  fears being reabsorbed into mother, while he’s not separated-out and secure, and identified with the masculine, then he can’t maintain an openness towards the feminine. He has to be too far away or, in guilt and disempowerment, too close.

Full individuation is a profound journey into our aloneness, and into the unknown. It eventually opens out into peace, presentness and oneness – but it’s intense, and it requires not-less-than-everything. It’s a letting-go, a falling, and it requires great intellectual and spiritual skill. But it’s the hero’s journey the masculine has to make. It’s the homecoming of the masculine to itself.

As we stabilise in The Third Man, The First Man and The Second Man are still there too – always ready to make their disempowering and disempowered contributions. The guidance of the feminine remains essential. And in humility, whenever we lose touch with ourselves (and therefore resist her), we just have to pick ourselves up, and forgive ourselves. In practice, rather than holding the idea of ‘becoming The Third Man’ as a destination to be reached, it is probably more nourishing to think in terms of the First, Second And Third Men each rising and falling within us, continuously – and accepting that, without abandoning our destination.

As we become committed to the journey of The Third Man we become more and more comfortable in the exquisite beauty of the unknown ‘now’, and from this place can honour the truth of the reflection our personalities receive from the feminine. But to sustain this commitment we need the support of other men, other men who are equally committed. We need their community. When my commitment is strong it sustains them, and when my commitment is weak their strength sustains me.

In this way, lacking the ‘vertical’ support that men once received from their fathers, their grandfathers and the elders of the culture, we receive the ‘horizontal’ support system of a brotherhood committed to a shared context: the path of The Third Man – a male community committed to honouring both the masculine and the feminine.

And this, of course, brings us back to men’s groups, or at least to male community. Whether or not it is a statistical fact that The Men’s Movement has gone into a bit of a lull, I am convinced that as men we can only go so far alone, and that our next evolutionary step is to honour the superior emotional knowing of the feminine, and to bow to her guidance – which is, of course, really, really tough for our egos.

It’s up to each of us. We can take this evolutionary invitation, or not. The choice is: to go on our personal journeys of aloneness, freedom and empowerment, open to the feminine and let go into the bliss of wholeness; or remain stuck up egoic little pricks, caught in our minds, bickering tooth and nail, defending by attacking (or defending by grovelling), and perpetuating the chaos of a disintegrating patriarchy.

As I see it, for the Men’s Movement to have an evolutionary future, there will need to be enough men with enough determination and humility to take up the invitation to masculine empowerment AND feminine empowerment. We need context, and we need commitment. This will create an atmosphere of solidarity that will strengthen us enough to be able to fall to our knees – again and again. Which, paradoxically, and heart-breakingly, is where true masculine power is honed for use in the world.

The Art Of Spiritual Embodiment

The Art Of Spiritual Embodiment